My first holiday with the Scuba Trust is definitely something I will remember for a lifetime. For me though my journey didn’t start there. I was a non diver; in the months leading up to the holiday, I worked hard to get my theory and pool sessions complete, ready to complete my first step on the PADI road and become a qualified Open Water Diver once in Oman. I had many people supporting me from inside and outside of the Scuba Trust, and without them I would have struggled to achieve what I have.

The start of the holiday for some was at Heathrow Premier Inn the night before after the monthly try dive. This meant that the early start didn’t have to be so early and that we were only down the road so had plenty of time to get there or so we thought. Once we got to Heathrow, there were lanes closed and signs galore. We parked up where we thought we were meant to be, to find that once we were unloaded we had found ourselves at the wrong terminal.  So off we go; Liam, Dee, James and I all go in search of the correct terminal. During this time, we all start getting phone calls from Frank wondering where we were. We finally arrive 30 minutes late to find that we weren’t the last ones there… Howard was stuck in traffic. A few minutes later he appears and the holiday can officially start.

I soon realised the amount of planning and organising that had gone on before even getting to this point. Even with all this planning, the systems in place were letting us down including no record that I was even a wheelchair user. But Frank was on the case and was able to resolve the issues we were experiencing.

Unfortunately, we had to say goodbye to a couple of our group before the plane was off the ground. Glyn and his friend/PA Carole had to make the difficult decision not to fly due to health issues. This obviously put a dampener on things and showed me the reality of trips like these when there are people with disabilities involved. I hope you are feeling better Glyn, and look forward to meeting you on future holidays.

The flights were long but that didn’t matter. I wasn’t given much time to think on the way out there as I was given my quizzes and final exam to complete. Once in Oman, we were met by a few different vehicles including a pickup truck. All of us, including our wheelchairs and luggage, were loaded and ready for us to go. Some of us managed to finally get to bed at around 3 a.m. (midnight UK time) whilst a few were still up trying to sort problems with rooms etc. Finally in bed with alarm set for 8 to be at breakfast for 9.

The first day was a fairly relaxed day with final preparations for the diving to commence the following day. For most of us that meant lazing in and around the pool and I was beginning to learn whom the biggest kids were on the trip…. Ron and Howard with the foam ball and later on in the week a foam dart to add to the mix.

Day 1 of diving and the biggest journey I was about to embark on with the first and second dives of my Open Water Course about to be completed. Dive 1, I was filled with great apprehension and mix of emotions. I was finally here and about to dive for real. I watched everyone as they prepared themselves mentally and physically, being guided by others with regards to what I needed to do. Dive 1 was physically and emotionally draining but I had finally got here and was achieving what I set out to achieve. The rest of my dives went well on day 1 and day 2 of my course.

I made great progress and was finally beginning to enjoy the experience of diving. By the end of day 2 I was qualified and so was able to enjoy the rest of the holiday knowing I had achieved what I set out to achieve.

During the rest of the holiday and through diving with different people I soon realised that my learning didn’t stop on day 2 and so I continued to learn and make progress for the rest of the dives. Some lessons I learnt were tougher than others, especially when trying to get my buoyancy right. Many of my notes in my log book refer to this and some days were definitely better than others.

For some people in the group the diving wasn’t as spectacular as what they have been used to on previous holidays due to visibility and a lack of big marine life. For me though this meant I could focus on me and my diving rather than getting distracted by amazing sites and losing sight of why I was there and that was to learn how to dive.

On the last night were the mandatory awards. Many people had mishaps throughout the week which led to receiving awards. All awards were received in the manner that they were meant and that was good fun. I was included in these awards, for more than achieving my Open Water. Enough said about that the better!

The final day was a relaxing day around the pool before starting the tiring journey through the night home. Some slept more than others during the flight but it was definitely a much more subdued journey compared to the one on the way out.

To summarise my whole first experience of holidaying with the Scuba Trust; it was amazing. The diving was only part of the holiday; what made it more amazing was the support, guidance and, most importantly, friendships that I built on over the week. Someone referred to the Scuba Trust as family and this is how it felt. I am fairly new to the Scuba Trust but this didn’t matter. I was made to feel welcome and part of the group. To me this is what makes these holidays special and I would like to thank everyone involved in this holiday and especially Frank, who puts in a lot of effort to make sure these holidays run smoothly but also a special thanks to him for believing in me and helping me get this far.

I’m looking forward to Mexico and the new challenges I will face. 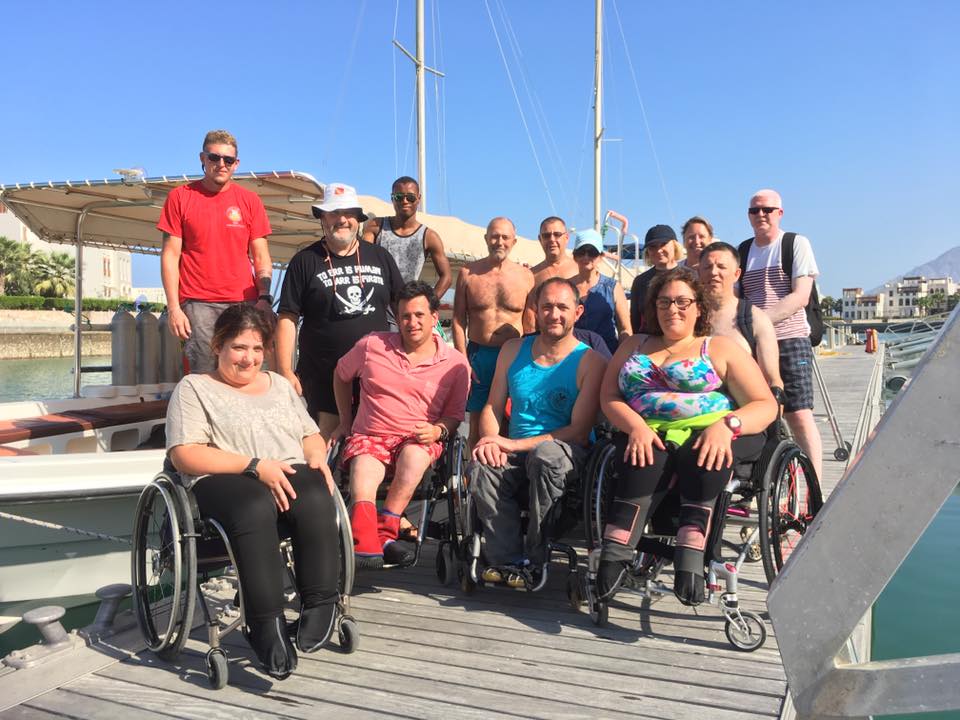