THE SCUBATRUST INVASION OF THE IBEROSTAR RESORT COZUMEL 2017.

It was just like any other morning. Not too hot, not too cold, not sunny, nor raining. Who would have guessed that this non descript morning would see the coming together of the most motley, cut throat, villainous group in all Christendom. I refer of course to the purple shirted Scuba trust gang. There was the butcher of Walthamstow, two mean bikers, the Bedford mafia, ‘Hang-em high’ Buchanan and his moll, Karate Neil, Eric the Strange and an unsavoury character with a foreign accent who claimed to come from Belgium, to name but a few. We were off on an adventure that would see us cross oceans (thanks to virgin atlantic), trek for miles (in minibuses), take to the high seas again (by ferry) to finally arrive at the Iberostar Cozumel.

The next day was a relaxing day as we got over the travelling of the previous day. The resort was lovely with flamingos and iguanas lazing in the heat. Not to mention the rare humming bird flitting from flower to flower. There was an extravagant choice of food at every meal sitting, even including burgers and hot dogs for the uncouth Americans. We all started to feel at home. This was helped by the butcher of Walthamstow supplying the tennis ball and Frisbee so essential to the entertainment of those around the pool.

The following day we met at 8am to have our first diving day with Dressel Divers. We were introduced to our guides Ryan and Aaron. Aaron was American and Ryan hailed from Scotland but we instantly forgave them and became good friends by the end of the holiday. The first dive was a drift dive. The reefs at Cozumel are often prone to currents, and today was no exception. I was in the second group led by Aaron and immediately upon descending we saw a nurse shark swimming by and later came across a turtle. This set the scene for the diving to follow which never failed to excite us. From black tipped reef sharks to sea horses, Moray eels to six foot long barracudas. The sea life was different from Egypt. Not quite so colourful and profuse but different and captivating in its own right. Juvenile Drum fish and Splendid Toad Fish were just two of the species you would not see in the Red Sea. Aaron and Ryan were great professionals and the whole experience was greatly enhanced by their contributions.

Frank and Amanda did a wonderful job of instructing Sarah Park and Mike Sparry. They both completed their advanced courses. Deep dive specialities were also completed by Mike and Simon Licence. Well done everyone!

All fifteen of us signed up for the excursion to the mainland to dive in a cenote. These are a system of caves and sink holes carved away from the limestone over thousands of years creating underwater caves and passage ways which link together for miles and miles, renowned for their beauty.  Shafts of light penetrate the roofs of the caves and create spellbinding effects.  After a taxi ride and then the ferry to the mainland we were met by the cenote dive guides in Playa Del Carmen and whisked off to their base. Here we collected weights and cylinders and headed off towards our chosen cenotes. After a short time on the main dual carriageway between Playa Del Carmen and Tulum we turned off up a dirt road. After six kilometres we arrived at the Kukulcan and Chuk Mool cenotes. There were other groups at the cenote but I bet they had never seen a group like us. We assembled our kit. Some of us had come across one of the guides when we had visited three years before. A very large six foot eight inch tall german called Olaf. Who promptly gave piggy backs for our wheelchair users down the steps to the first cenote. The temperature in the cenote was 22 degrees a little cooler than the sea at 28 degrees and a welcome respite from the heat of the jungle. As bats flew in and out of the cave we dropped down and went off in groups of four or five. We were treated to a lovely show of stalagmites and stalactites. We surfaced half way through to see tree roots dropping through the roof of the cave and into the fresh clear water of the cenote. The way the roots poured themselves into the water gave rise to their name ‘elephant’s foot’.  They were quite a sight.  All too soon the first dive was over and we relocated, some via the back of Olaf, to the other cenote,  Chuk Mool.  After a short interval were we heading off again into the cavern. Most of us can recall photographs in magazines showing divers silhouetted again a shaft of green light as they bravely explore the cenote ahead. My view differed very slightly.  There would be the familiar line of divers except in the middle of the line there would be one diver standing vertically in mid water not wearing any fins and making progress with a breast stroke action and webbed gloves. Yes, the Scuba Trust gang waz ‘ere alright. With torch light dancing wildly around the rocky surrounding we came to the end of a memorable experience for everyone. Thank you Dressel and thank you Olaf!

A couple of days later the weather turned slightly stormy. We were due to be diving the Palancar caves which is a series of rocky architecture ideal for swim throughs. This morning the surface was a bit choppy and during the dive we were caught in some weird down currents caused by cool water at the surface sinking and the warmer water below rising up. When we finished the dive, we surfaced to find that the swell had increased and this made getting back on the boat a little more challenging. Sporting a few bruises as souvenirs of the endeavour we decided to cancel the second dive. We returned to the jetty where some of us saw that the weather had died down and it was suggested that we do the house reef Paso Del Cedral. Six of us dived in and found the current had turned into a gentle drift and we were treated to turtles, rays and Ian got some great footage of a nurse shark foraging under a rock.  When we returned to the hotel we were asked by those who had decided not to do the second dive if we had had a good dive. We tried to lie as convincingly as possible but the smile on our faces gave it away.

On one of our days off from diving some of us decided to go on a tour of the island. We visited the town of Cedral.  This had a small Mayan temple the size of a garden shed with a Mayan warrior dressed up for us tourists outside to take photographs of.  We then went on for a drink in a reggae bar at the bottom of the island. The ceiling was festooned with tee shirts pinned to the roof in typical Carribean style.  So we signed everybody’s name on a spare tee shirt of our own and got it pinned up. It reads Scuba Trust 2017 and on the bottom below everyone’s names it said Bazza West’s favourite catchphrase ‘ONE LIFE, LIVE IT!

All too soon the last dive of the holiday came along and as is customary a couple of us did it in fancy dress. Liam sported a fine ‘bottle of Tequilla’ outfit whilst Dee is still receiving counselling over my effort.

On the last night we had a super meal in the A La Carte steakhouse restaurant in the resort. We invited our dive guides as our guests and had a lovely evening together. All in all it was one of the best Scuba trust holidays I have ever been on and I would like to thank every member who came and made it so special. 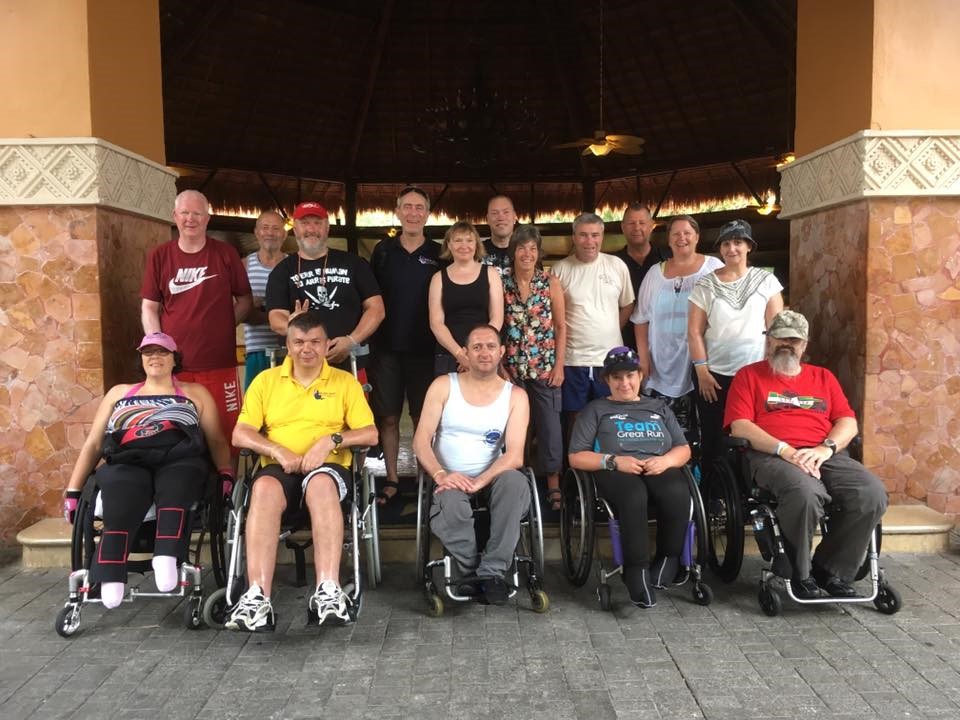