Adventures on the High Seas! The Inaugural Scuba Trust Live-Aboard

This was a first for the Scuba Trust – Blue 02 Red Sea live-aboard and Adam Quarterman’s first Red Sea trip; hopefully not his last. Liam and Dee had previously been on this boat, Horizon Blue, 02’s flag ship and Pride of the Fleet, and were very impressed by the service they received, along with a great week’s diving,visiting some of the more remote sites day boats do not get to. On Liam & Dee’s recommendation, the group was booked onto what promised to be an exceptional adventure on Blue 02’s Horizon, Northern Wrecks and Reefs itinerary.

We gathered at Gatwick airport check-in at 10 a.m. with all the excitement and expectation of the unknown. Our first casualty was Eric as Annie was unwell and so he had to pullout at the last minute, Annie is fine now and hopefully both will join us on another dive holiday to make up for the disappointment. This trip was a first for most of the group and I, for one, was uncertain what to expect. Thankfully, the flight was uneventful. Allan Sears, true to form, made up for it by giving a running commentary on the landing as we arrived at Hurghada International, much to the amusement of most of the other passengers. Blue02 staff were there to greet us and efficiently ushered the group through the airport, out on to the waiting buses and cars, and whisked us off to meet Blue Horizon, our waterborne accommodation for the week. The shoes came off and that was the last time any of the divers wore shoes for the week. All the en-suite cabins were very comfortable and after settling in, we set our kit up for the first and last time of our holiday.

After the initial set up on Day One, the only thing a diver had to do after each dive was to check that the crew member, who had eagerly removed your kit from you, had replaced it in the correct kit station; then you removed your reg set from the tank and placed the tag for which fill you required – air or nitrox. Unfortunately there were problems with the nitrox blending computer and despite Blue 02’s crew’s best efforts, we only had compressed air for the week. After setting up we were treated to a feast of a dinner; all tastes were catered for – even Liam had his fill (a supply of crisps from the chef – yes we saw you mate!).

At the start of the first day, breakfast was an excellent spread – a choice of eggs in any way you could conceivably think of: poached, fried, scrambled, and even extremely spiced-up omelette, which Dee ordered but I somehow ended up with and WOW it was eye-watering hot!!! . We started to get to know the other two groups of divers who were also on the boat, many who had never dived with a disabled diver, let alone a large group from the Scuba Trust! By the end of the week, both groups were very inquisitive about the Trust and what the Scuba Trust did. We made some very good friends as always happens on our trips.

After the extensive briefings, we were off for our first dive of the day. The usual fantastic Red Sea sea life and turtles. Back to the boat and testing out the various adaptions made to the boat by Blue 02 to get the chair users out of the water. So far so good. During the week most people completed between three and five dives per day including day and night dives on the world famous Thistlegorm. This is probably my favourite wreck I have ever dived on; if you ever get the chance to dive the Thistlegorm, take it.  This wreck never ceases to amaze divers of all abilities and ages. The vast history behind the Thistlegorm is amazing.

On another dive, our group had the pleasure of coming across a Nurse shark at a cleaning station, and those in our dive group that day have some fantastic footage.

On another dive, whilst in the aptly named Dolphin Alley we were just about to return to the boat disappointed that no dolphin had been seen. In the meantime, Lindsay and Suzanne were taking a photo opportunity (see photos), when down the channel came a pod of dolphins – perfect! Quite a few of the dive sites were reached by RIB (Rigid Inflatable Boats) and we had one or two antics going off over the side, but I’ll let Mr. Coffey remain anonymous. It goes “One, two – whoops! He’s gone again – three!!”

After most night dives and some superb dinners, which were served up by our two chefs, the crew assisted the wheelchair users up to the top deck to mingle with the other divers and to get near enough to the Wi-Fi router to get on social media; this was very hit-andmiss most days but that’s nothing unusual for Egypt. For most of us, this was the only time we exchanged our swimwear and bathrobes for casual wear.

We did have some entertainment out at sea when one of the day boats with Chinese divers on-board decided to have a BBQ on the dive platform; smoke quickly engulfed the whole boat and ended up being dowsed by the a crew member.

All too quickly the week was coming to an end but the chefs and crew had one last meal surprise for our last supper. How they managed to produce what they did (see photos) was just unbelievable in such a small galley kitchen and for so many people. The pastry chef was first class; you would expect to see his creations in top class hotels. Thursday evening and we docked for the first time in a week and our last sleep on board. Friday morning breakfast and last minute packing, then it was off to Hurghada airport.

Check-in staff then informed us that no spare batteries were allowed on board the aircraft and there were threats of iPads being confiscated. Those who were randomly searched had all ‘spare’ batteries taken from torches and cameras. Finally, after a lot of discussion the cabin crew took charge of the various iPads that had been taken from passengers. As long as you told the security staff that your batteries were not spares they allowed them through!

Apart from the departure escapades we had a great time, made some good new friends who have met us at our stand at the last dive show in Birmingham and made several donations, for which we thank them.

Now looking forward to the next dive trip, planned for next May. Join us. 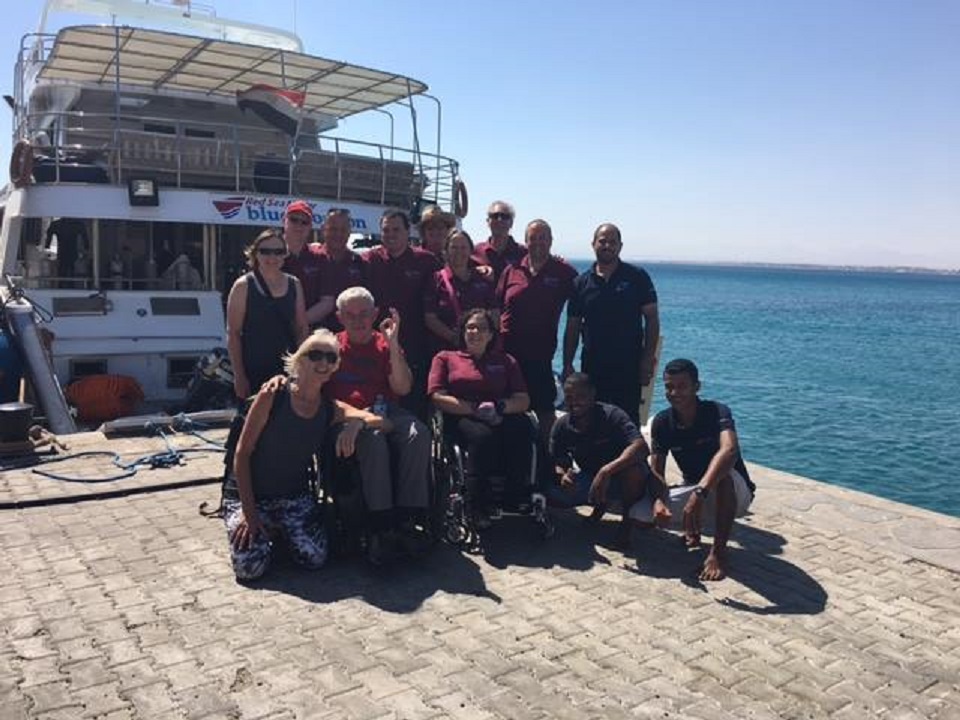